Building a vLab Part 1: The Design

Like many in the VMware community, having a home lab on which to try things out is something I've been working on for some time. As I prepared to update my VCP3 to the VCP4, I thought it would be good to build myself a new "vLab" to test - and break - things without worrying about production systems and complaining users.

This mini series is partly inspired by a posting on TechHead's blog. I think there was originally going to be a series there, but for whatever reason (I'm guessing time was the issue), it didn't really develop.

In order to be able to run through the VCP4 syllabus, I needed the following:


This is what I'm aiming for: 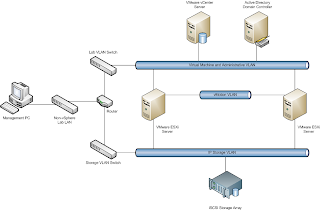 Obviously this is going to take up a fair amount of space, will be noisy and hot. So the approach I'm going to aim for is to run the entire vLab on a single HP ML115 G5 with 1 x quad core CPU and 8GB RAM. I'll run VMware ESXi as the base hypervisor and then install the following VMs:


For the Windows Server 2003/2008 licences I'll use my Technet subscription and the OpenFiler and Vyatta installs are free. For the vCenter Server and enterprise features of vSphere, I'll have to use the evaluation licences.

With the software components downloaded and ready to do, it's time to do the build...http://livingonthecloud.blogspot.com/2010/10/building-vlab-part-2-infrastructure.html
Posted by JR at 11:46

How much disk space are you going to use for the iSCSI/NFS OpenFiler? I'm interested...

Thanks for sharing, looking forward to see next step

I've detailed the ML115 configuration a bit more on the next post (just up). I've got 2 x 500GB SATA disks in the ML115, but am currently only planning on using one of them for the vLab.