In the last post in this mini-series, we created a VM for vCenter Server and set it up in such a way that the install could be rapidly rebuilt in the future. The next step is to create our virtual ESXi instances (called vESXi in this blog).

When sizing the VMs, it's worth thinking of the vESXi hosts as if they were physical. For example, most physical ESXi servers will have multiple network cards, so we'll put several in our vESXi servers.

Create the virtual machine as you normally would, specifying the following parameters:
Use the datastore available to the pESXi server and not the OpenFiler VM. Accept the default virtual disk size of 8GB and tick "Allocate and commit space on demand (Thin Provisioning)".

Edit the settings of the VM and add more network adapters (remember, we need this VM to appear similar to a physical host). For the vLab, use a total of 6 network adapters in pairs for the LAN, Storage LAN and vMotion LAN respectively.

The other networking step required is to edit each vSwitch, select the port group and edit the security settings: 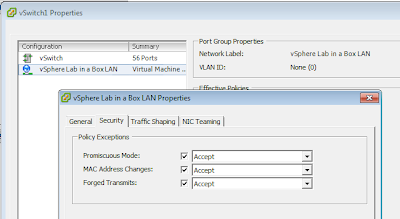 Do this for all the vSwitches.

While this is enough to get ESXi installed, you won't be able to power on any nested VMs without making the following change. When the vESXi VM is created (but not powered on), right click on the VM and select "Edit Settings". On the Options tab, select Advanced, General, Configuration Parameters. Add a new row and give it the name monitor_control.restrict_backdoor with a value of true: 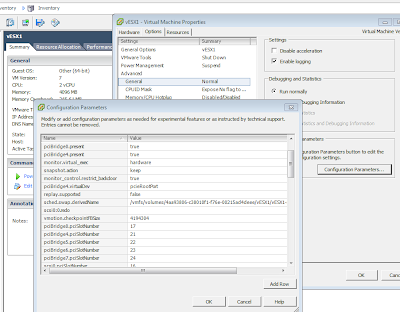 Now insert/connect the ESXi install CD/ISO and power on the vESXi VM. To be honest, this next bit should be simple (especially as you've already installed the physical ESXi server).

Once installed into the VM, assign a static IP address.

Now open a second vSphere client instance and connect to the vCenter Server. Within the vCenter Server, create a new Datacenter and add a new host, pointing to the IP address of the newly created vESXi VM. When added, the new server should look similar to this: 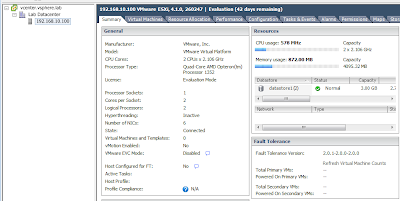 There's not much point in having a lab with only a single server, so repeat the process detailed in this post and create a second VM. In the next post, we'll configure it all up...
Posted by JR at 18:48